Investing in the SSE to improve employment 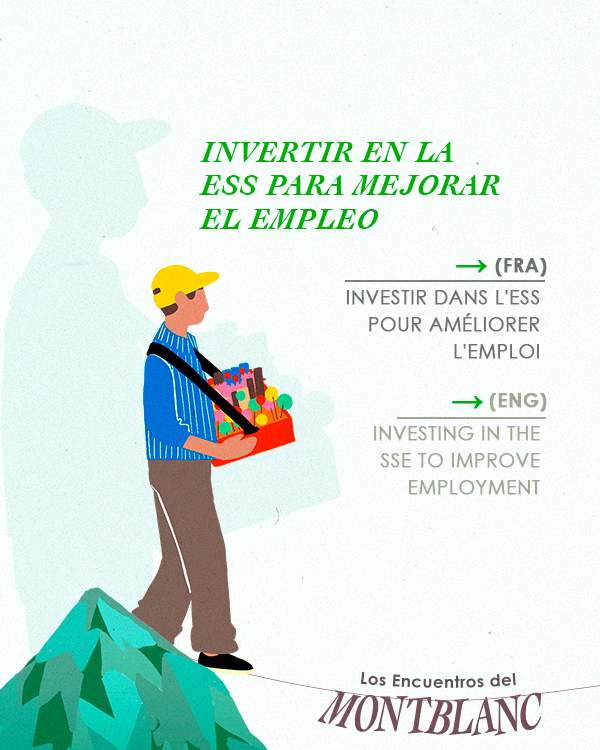 Investing in the SSE to improve employment

In designing the session dedicated to the relationship between the SSE and employment, it is important not to lose sight of the objectives chosen for the next Mont Blanc Meetings. They are situated in the triple perspective of:

1. showing the potential of the SSE to achieve the sustainable development goals set out in the 2030 Agenda adopted by all governments in September 2015 at the UN;

2. raise awareness among municipalities on how SSE can help solve many of the problems they face;

3. contribute to accelerating the internationalization of the SSE.

The aim is to encourage SSE actors and partners on the one hand, and public authorities on the other, to set goals and forge partnerships to harness the capacities of the SSE to provide concrete solutions at local, regional, national and international levels to a range of problems and challenges in a global shift – technological, demographic, ecological, health, social and societal. The Mont-Blanc Meeting 2022 aims to develop, for each theme addressed, a roadmap that can grow the SSE on all continents.

It is not, therefore, an academic seminar, even if certain analyses are necessary, but to identify what can contribute to multiplying and strengthening the dynamics in each place. For this reason, it is also important to highlight what each company, organization, institution, politician, individual and community can gain from participating.

In the vast majority of countries, the economy is still largely dominated by practices linked to the logic of competition, profit generation and speculation. However, on every continent there have long been companies, individuals and institutions that successfully operate according to other logics that can be grouped under the name “SSE”, putting people, their needs and well-being, as well as the general interest, before the maximization of profit. These initiatives have attracted increasing interest from public authorities in many countries over the last two decades, particularly because of their strong social impact and because, on average, they seem to be more capable of creating jobs than traditional enterprises.

The SSE has even proved more resilient in times of brutal economic crisis, such as the 2008 financial crisis and the shocks caused by the measures taken with regard to the Covid19 pandemic. Moreover, the SSE is generally attentive to well-being at work and therefore tends to generate decent jobs. Hence the interest shown in it by a growing number of governments, which are providing it with a legislative framework that will enable it to flourish. Given the local roots of most SSE enterprises and organizations, local authorities also have much to gain by overseeing their development because, on the one hand, these enterprises and organizations provide non-relocatable jobs and, on the other hand, they reconcile economic, social and ecological concerns and thus contribute to social cohesion.

For all these reasons, the International Labor Organization (ILO), which aims to promote “decent work”, has in recent years highlighted the multiple advantages from which all societies can benefit by deciding to actively promote the growth of the SSE. In 2021 the ILO Governing Body held for the first time a general discussion on the theme “Decent work and the social and solidarity economy (SSE)”, and on 30 March 2022 the ILO has published a report on this topic. On June 11, 2022, at the end of its two weeks of work, the International Labor Conference (the ILO’s highest decision-making body) adopted a “resolution on decent work and the social and solidarity economy” that recognizes the strong contribution of the SSE to the creation of quality jobs and encourages governments, employers’ organizations and trade unions to work together to facilitate its growth and consolidation.

Therefore, this session will focus on: Highlight the added value of SSE in terms of:● capacity to create jobs, even in periods of economic crisis● quality of employment, working conditions, well-being in the company● capacity to help integrate informal economy enterprises into the formal economy,thus improving employment conditions and social security in the long term● resilience of jobs in the face of chronic and short-term shocks● contribution to the return of unemployed people to work● all the benefits that local authorities can derive from it, and identify measures that could further improve these performances where they are not optimal. ● Identify the conditions necessary or useful to grow the SSE as well as what it contributes in the labor field. ● Identify public policies, laws and regulations to stimulate the local development of the SSE in the sectors in which it generates employment. ● Identify the main obstacles to the development of the SSE and its contribution to employment, and identify possible solutions. ● Highlight examples of initiatives taken by various local authorities, draw the main lessons and propose an information strategy for actors who can implement it. ● Identify/anticipate the main challenges related to innovation in relation to employment and SSE.

● What are the characteristics of enterprises and various entities that meet SSE standards thatmake them, on average, better able to create jobs than many traditional enterprises?● How does the social and solidarity economy contribute to the creation of quality jobs? Whatis its added value?● How can we, following the 2022 International Labour Conference, encourage governments,employers’ organizations and trade unions to work together to facilitate the growth andconsolidation of the social and solidarity economy?● What measures can local authorities take to promote the birth, establishment anddevelopment of the SSE in their territory?

● What sources of funding can be implemented to specifically assist the creation anddevelopment of SSE-type enterprises and institutions?

The session will be conducted in panel format, with 10-minute presentations by each speaker, reaching 40 to 50 minutes, and then leaving space for questions, but above all, proposals and agreements. Each speaker will be asked to suggest proposals for action in their presentation.